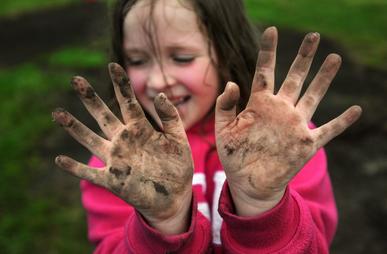 Why We Don’t Sell Roundup At Minnesota Gardens

Go Play In The Dirt!

There are allot of substitutes to use instead of Roundup, but the one thing I use that is tried and true is White Vinegar.  Why douse them with something that will remain in the soil for who knows how long? Try vinegar instead. It’s is cheap. It’s easy to use. I keep gallons of the stuff in my garden shed.  I use a 50/50 mix and spray on a sunny day.  Some people use salt in the mix, I don’t. 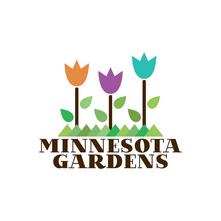 Another way to take control of your weed problem that works well is your hands.    Go play in the dirt, have your kids join you, turn off the cell phones, the TV, and the internet and go play in the dirt.  I have been gardening for years, and my favorite part is always playing in the dirt. 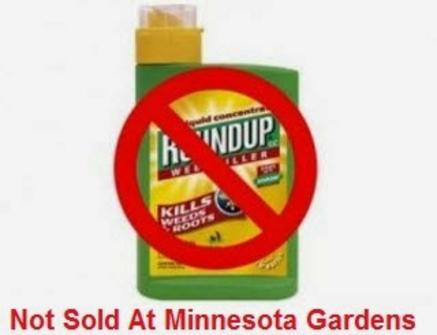 Its main ingredient is Glyphosate, but studies show Glyphosate is not as good as it is billed. Glyphosate is less toxic than many other herbicides, but it's still the third most commonly reported cause of illness among agricultural workers in California. Glyphosate products are acutely toxic to humans and animals, with symptoms like eye and skin irritation (lasting up to 7 days), cardiac depression, gastrointestinal pain, vomiting, and accumulation of excess fluid in the lungs. Glyphosate can cause other long-term damage. Population studies show increased miscarriages and non-Hodgkin's lymphoma. Animal studies show genetic damage, reduced sperm counts, cataracts, and thyroid, pancreas, and liver tumors.  For landscape maintenance workers, it ranks highest in their field as respiratory problem.
When the vast majority of today's most prevalent diseases can be traced to the same long-term side effects brought about by exposure to Roundup, we have a very real public health crisis on our hands.

The Basics Of Roundup

So the next time you’re in your favorite Garden Center that promotes “We are green, we support organic gardening, and we are doing our part to save the environment.”  Ask them why they are still selling Roundup.

With more and more people realizing the effects of Roundup not only in their own gardens, but the effect it has worldwide we have decided to explain why we don’t sell Roundup.

I was reminded after I was at a seminar at a local nursery a few months back that talked about the benefits of organic gardening and how they are going green for the environment.  I was very pleased until I walked around their store and noticed Roundup products.  I asked a clerk why they are selling such a horrible product if they are trying to sell their customers about going green.  Her reply was “If they don’t buy it from us, they will buy it somewhere”  That might be true, but to tell your customers your all about going green and saving the planet when you sell a product that is killing the environment is all about marketing and profits.

After I left, I stopped at a few other nursery’s ranging from the big stores to some mom and pop stores.  What I saw and experienced at 90% of them was, “We are going green, we want to save the planet, we sell organic products for your health because we care.”  It was the same story over and over again.  It was simple marketing about “Look at us and how much we care about you and the environment, but go down isle 9 and buy some Roundup.”  Marketing and profits was their story, saving the environment was just a marketing tool. 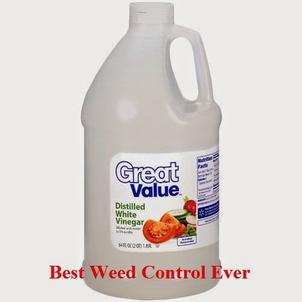 Roundup is what's known as a broad-spectrum herbicide, because it kills nearly anything green.  When I say nearly everything green I mean, from Crabgrass to Milkweed, yes Milkweed the plant that Monarch butterflies need to feed on.  When I was a child we would drive out to Stillwater to go boating and I remember seeing Milkweed everywhere in the ditches with 1000’s Monarchs all over them.  When I last went out to Stillwater last summer I could count on my hands the Milkweed and Monarchs I saw.

It’s Effect On Your Environment

A person might think I am just spraying the cracks in my driveway where the weeds grow or in between the rows in my garden.  What Roundup is doing downstream from your yard is another story.
The World Wildlife fund announced that last year’s Monarch migration from Canada, to the United States and down to Mexico was the lowest it’s ever been since scientists began tracking them over twenty years ago. In fact, a 43 percent drop has been measured compared to last year, that’s huge and very concerning.  It’s not only Monarch Butterflies, but Bees as well. A lot of information has come out linking Monsanto Roundup to the death of millions upon millions of bees over the past few years.  These pollinators are very important to your environment.
In Minnesota Monarch larvae feed exclusively on milkweed, which has seen a 58 percent decrease across the Midwest between 1999 and 2010 because of herbicide (Roundup) use and loss of habitat.
In California Glyphosate has been detected beyond the recommended limits of good drinking water in 41 percent of groundwater samples tested reveals yet another concerning "side effect" of its rampant use, namely, that it is not biodegrading in the soil, as previously told to us by Monsanto.
I could go on and on about the effects of Roundup and how it is affecting you on a daily basis from the food you buy in the store to the grass your children play on the park, but I just wanted to get my basic point across to you of its effects.